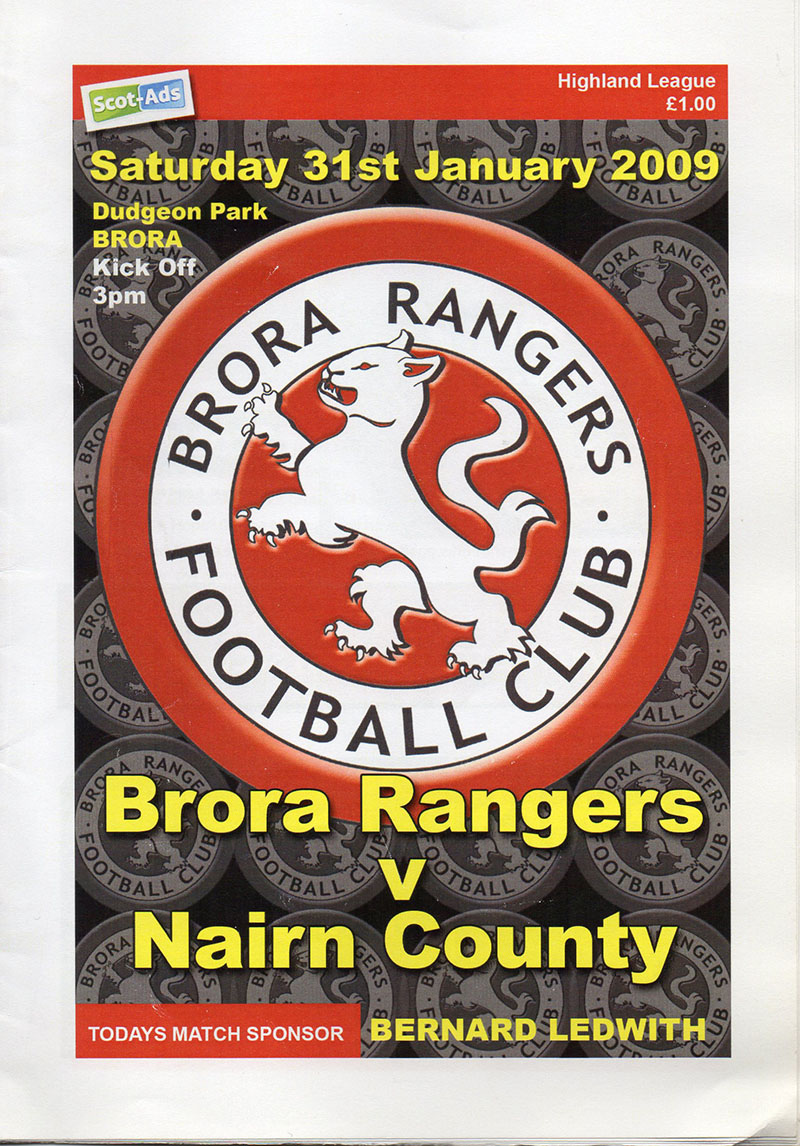 The perfect start to this game gave Nairn County the ideal platform to go on and take three points from the trip to Brora Rangers. For when Shaun Kerr put through the hosts' net with less than two minutes on the clock, the result never looked in any doubt.

In truth, County strolled to victory against the winless home side, who never really looking like causing Nairn goalkeeper Callum Donaldson any real problems. The visitors on the other hand, launched wave after wave of attacks on the Brora goal and only some fine saves from loanee Matthew Curtis between the posts kept the score line respectable for Muir Morton's men.

Nairn boss Les Fridge made three changes to the team which picked up a first win since November last time out against Fort William. Andrea Coletto dropped down to the bench while Billy Horne was left out of the squad completely. Centre back Stephen Skinner was unavailable meaning David Hind came in for a debut alongside Martin MacDonald at the back. The right-footed Scott Nicholl occupied the left-back berth as he made his first start of the season while Wayne Mackintosh came into the midfield, with Gary Black moving to right back and Brian Macleod playing on the left of a middle four.

The visitors broke the deadlock early on when the deadly Kerr struck for his 13th goal of the season. Then Lewis MacKinnon doubled County's advantage by despatching Gregg Main's pass on 16 minutes before the towering forward doubled his tally in the 65th minute after a MacDonald header had been parried.

Nairn opened the scoring when the impressive Brian Macleod surged down the left. His pace took him away from his marker and he slipped a neat pass inside to Shaun Kerr, who had made the run alongside. It put County's top scorer in on goal and he didn't need a second invitation to place a shot from 12 yards over Curtis and into the net.

The visitors continued to push forward and Gregg Main saw a 25-yard, left-footed shot held by Curtis on seven minutes. Then the Nairn midfielder was fed by a Willie Barron cut back from the by-line on the left after 13 minutes but his left-foot shot from 12 yards drifted over the crossbar.

The travelling supporters did not have long to wait for a second goal though. With 16 minutes on the clock, Barron raced down the right and cut the ball back to Main at the edge of the box. He threaded it through for Kerr - who had had made a perfectly timed, third man run. From the by-line, Kerr then cut the ball back for the waiting Lewis MacKinnon and past the advancing goalkeeper. It left Nairn's number eight with the easy task of rolling the ball into the net from a couple of yards.

Brian Macleod went close with a volley on 20 minutes when he connected with Barron's cross from the right, 15 yards out at the back post but his effort flashed over the bar.

MacKinnon then played in strike partner Kerr a minute later but goalkeeper Curtis was alert enough to race from his line and deny the former Clach and Ross County man a second of the afternoon.

Brora took 26 minutes to register any kind of shot at goal and when it arrived it was definitely not worth the wait. Jamie Mackay's speculative effort from 22 yards was tame but deflected off Hind and won his team a corner.

But on the half-hour mark, Nairn were back on the attack as MacKinnon took down a high ball before neatly touching it into Kerr's path. The County striker decided to take the shot on first time and from 25 yards he nearly caught out Curtis. But the backpedalling-goalkeeper's blushes were saved as he managed to tip the shot over the crossbar.

After Main was replaced at the interval by Steven Edwards as a result of a shoulder injury, the second half continued in the same vein as the first with Nairn in the ascendancy but knowing Brora only needed one goal to come straight back into contention.

And on 55 minutes, County nearly finished the contest as Barron's ball up the touchline on the right was controlled by Kerr, who had his back to goal. The Nairn striker spun Mark McKernie and fizzed a shot towards the top right hand corner but he was denied by Curtis.

Barron himself should have put the game to bed 10 minutes later. Some slack play at the back by the hosts saw the Nairn captain win possession in the final third. He was clean through on goal as he raced forward but was denied by a timely sliding tackle.
From the corner which followed though, County put the result beyond any doubt. Barron's flighted ball was won in the air by a towering MacDonald header from 12 yards. The Nairn centre back's effort was kept out by Curtis, who parried the ball upwards. As it dropped though, the goalkeeper was grounded and Lewis MacKinnon was on hand to nod home his third goal in two games from a couple of yards.
Brora thought they had got themselves back into the game when McKernie slotted home a cross from the right but his effort was disallowed for offside.

Barron again took advantage of sloppiness in the Brora defence as he intercepted a quick free kick and raced towards goal. But the Nairn wide man's shot from 15 yards on the right was parried by Curtis at his near post.

Donaldson in the County goal made his first save of the afternoon on 81 minutes. A Brora corner from the left was headed back across goal at the back post to McKernie a couple of yards out. But the luckless defender saw his header from point blank range instinctively blocked by the Nairn 'keeper.

Substitute Glenn Main played in Barron down the right three minutes later as County attacked again. This time though, Curtis raced from his line to block the County skipper's advances.

Scott Nicholl then played a long ball up the left which dropped over Macleod's shoulder. But the County man saw his first time volley smothered by Curtis.

In injury time, only a fine save by Curtis prevented MacKinnon from claiming a hat-trick. The Nairn forward controlled a high ball with his back to goal on the left edge of the penalty area. He then turned inside and onto his right foot and sent a curling effort across goal. It seemed destined for the net until the Brora shot stopper dived to his left to make an, impressive full-length save.