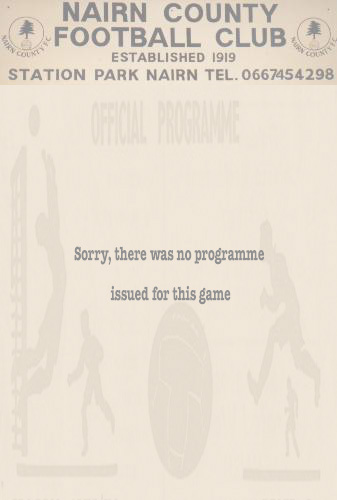 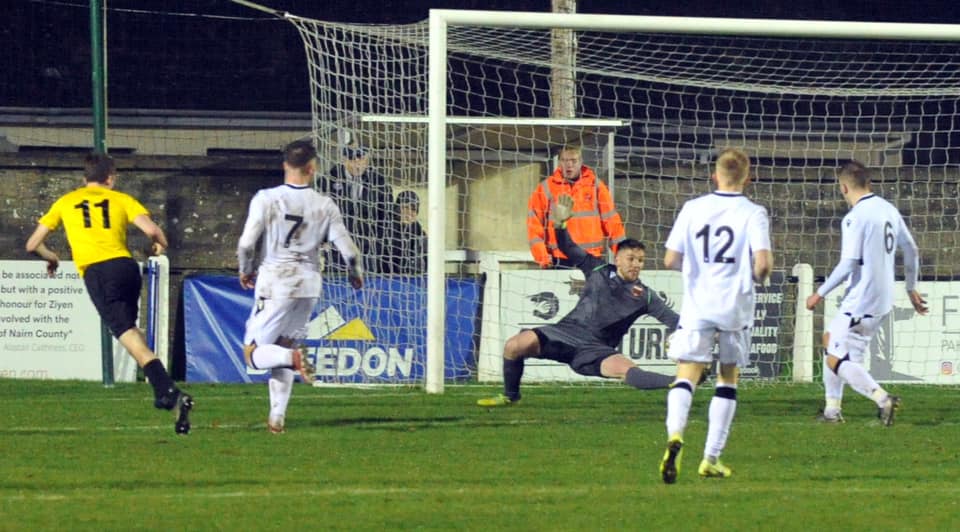 It was a 5 goal festive thriller as Nairn County edged out our visitors from Rothes in an action-packed game at Station Park this afternoon. Goals from Marksmen Ciaran Young, Dylan MacKenzie and Conor Gethins were enough to seal the points to send the fans home happy for the first time this season with a win at home.

The ghosts of injuries past still haunted the squad with 9 players still out injured, but Ronnie Sharp was able to go with the same starting 11 which won at Vale last week, a reshuffled bench saw a vote of confidence in the youth of our Reserve squad players being promoted, but also saw the return of Conor Gethins from a rib injury……..and what an impact the Nairn legend was to have.

We started at 2.59pm and as the clock struck 3pm we were in front! Kenny McKenzie tore down the left wing from straight from kick-off, beat his man and swung a low cross to the unmarked CIARAN YOUNG who gleefully smacked home to give us the lead (1-0).

It was ding-dong merrily half of high drama as both teams went back and forth at each other trading chances. The County Alumini Gary Kerr almost equalised for the visitors when he looped a shot over the backtracking Dylan MacLean but the ball nestled ….onto the top of the net to the relief of the Nairn fans. Back came Nairn when Ciaran Young was put through by Rory Williamson, and as the Nairn strikers eyed goal number 2 he was denied by a great save by Sean McCarthy in the Rothes goal!

Whatever Ross Jack said to his troops at half time certainly worked. Rothes were like 11 lords-a-leaping at the Nairn defence from the whistle and within a minute they were level. Another ex-Nairn man, Alan Pollock, swung in a deep cross and McRItchie rose like Rudolph to smash a header past MacLean (1-1).

On 61 minutes the men from whisky country were ahead. A festive gift of a goal as the Nairn defence were caught napping and Gary Kerr had two bites at the christmas cake presented to him before he slotted it home (2-1) and it felt like Scrooge had returned to take all our Christmas joy when it was that man Kerr again who smashed a thunderbolt of a shot off the Nairn crossbar. Was it to be a lump of coal under our County tree after all?

But no! Santa Sharp was quick to action, replacing Young and Dey with the speed of Dylan McKenzie and the apex predator that is Conor Gethins and it had almost instant results. A snap Gethins shot rebounded out and there was DYLAN MACKENZIE following in to give Nairn parity once again (2-2, 65mins).

Suddenly it was Nairn with the bit between their teeth, Gethins spotted McCarthy well off his line and his lob from fully 37yds beat the despairing Keeper and the crowd was hushed at the prospect of a Christmas miracle…….. but the ball dropped inch over the bar.! Bah Humbug!

Nathan Grant made his Nairn County debut, replacing Ednie on 77mins and the young Nairn man made an immediate impact, making a string of good tackles to blunt the Rothes attacking threat, complementing Dylan MacLean between the sticks who was also in fine form.

Conor was very much in the mood though, 3 minutes later he smacked a polar express of a free kick from 25yds against the upright with McCarthy beaten. You could tell the little maestro had one more christmas gift to give and his moment came in the 81st minute.

A scramble in the box led to a Kenny McKenzie shot being blocked, but CONOR GETHINS was there in a flash to slam home the winner to put Nairn 3-2 up…….but wait, was the Grinch of a Linesman going to deny us at the death as Referee Nicolson was called over to consult with him. Joy to the world though, the Officials agreed that the goal was good to the delight of the Nairn legions. A final moment of doubt as the Tannoy Announcer, who had clearly had too much mulled wine, awarded the goal to Kenny McKenzie, but the effervescent Gethins still found time to indicate that he was indeed the bearer of the gift of goals and the error was quickly corrected!