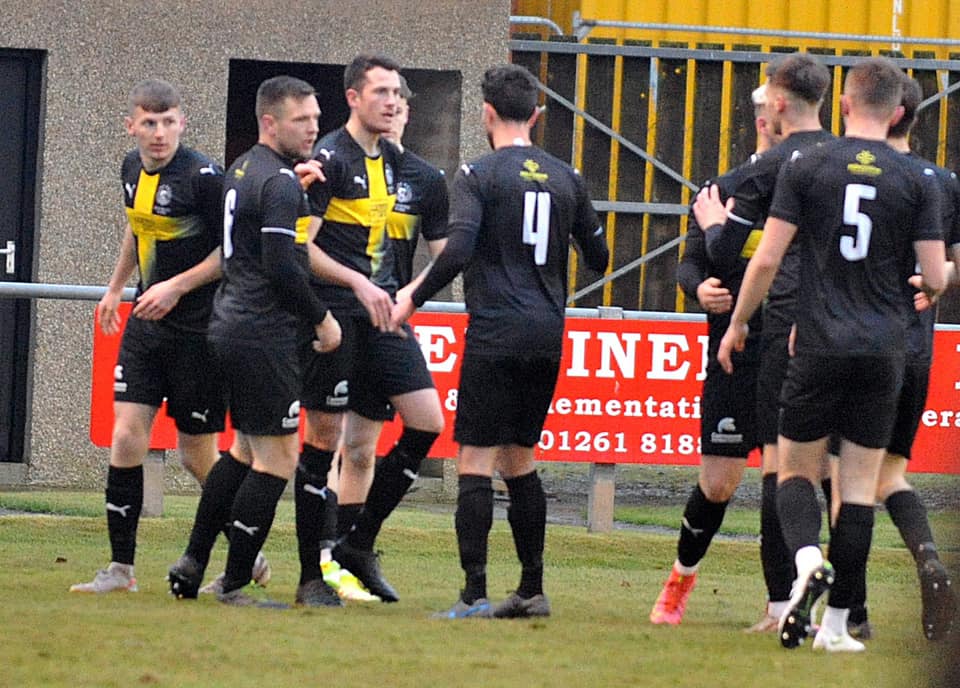 A moment of magic from teenager Kyle MacDonald settled this nine-goal thriller in our favour at Princess Royal Park as the young attacker made a dream start to his senior career.

MacDonald only debuted as a late sub last time out against Keith then was thrown on again with just a few minutes to go today with an all-action game finely poised at four-apiece. And he repaid the manager's faith in spades by cracking home the winner two minutes into injury time.

The youngster was one of three players to have come through our youth system on the score sheet as the pipeline of talent from Stuart Finnie's Reserves Team continues.

Ronnie Sharp was without 13 players as Calum Howarth, Fraser Dingwall, Tom Maclennan, Conor Gethins, Scott Davidson, Liam Shewan, Dylan Mackenzie, Lewis Mitchell, Seamus McConaghy, John Treasurer and Ben Williamson were all injured, Adam Porritt served a suspension and Grant Hogg had work commitments. That meant the manager only had a dozen players to choose from, so brought in MacDonald from the reserves along with Nathan Grant and Callum Morrison.

We made a bright start playing with the strong wind behind us as the returning Callum Maclean slipped a through pass for Ciaran Young to run on to on five minutes. His low, angled effort across goal was blocked by the legs of Deveronvale goalkeeper Sean McIntosh but the rebound was just behind the lurking Glenn Main and he could only divert the ball over the crossbar.

Two minutes later, Sam Gordon's cross from the right was flicked on by Ryan Fyffe at the near post for Maclean to run on to but he was on the stretch as he met it, sending the ball rising over from eight yards.

We made the breakthrough on 11 minutes though. Gussie Dey made a darting diagonal run from inside to out as he ghosted off his marker to fasten on to Kenny McKenzie's forward pass from the left. The in-form midfielder found himself free in the box and guided the ball past McIntosh at the goalkeeper's near post for his second goal in four matches.

That was no more than our early play had deserved but we then sat off and invited Deveronvale back into the game, which was punished in emphatic style as the hosts turned the game on its head with two goals in a minute.

Trialist Andy Hunter beat Dylan Maclean to the ball at the edge of the box and looped his shot over the exposed stopper with the ball dropping into the net to level it up.

We finished the half strongly though and managed to grab the crucial leveller before the interval, to give us the platform to push on after the turnaround.

Callum Maclean's through pass to Ciaran Young looked to have found the Nairn centre forward in an offside position. But a stretching Deveronvale defender got a toe on the ball in his attempt to make an intervention, meaning that there was no need for the linesman to raise his flag. Young's eyes lit up as he raced on to the ball and slalomed past a defender and into the box before being upended from behind and giving the referee no option but to point to the penalty spot. There was no doubt over who was going to take it as the young striker immediately grabbed the ball before finishing emphatically from 12 yards.

We went back in front nine minutes into the second half. Callum Ednie's crisp forward pass found Rory Williamson just outside the box and the teenager took a great first touch to set himself before scooping the ball over the backtracking McIntosh to put us 3-2 in front.

But Deveronvale made it all square again just four minutes later. A corner kick from the right found the unmarked Innes McKay just a few yards out and the towering defender steered the ball past Maclean.

We went back on the attack again and re-established our lead in stunning style on 64 minutes. There was some doubt over whether Sam Gordon's first goal for the club a few weeks ago at Lossiemouth was his own or an own goal but on this occasion, there was no doubt.

Kenny McKenzie went on one of his trademark forages down the left before sending across a floated delivery from the by-line. Gordon was unmarked eight yards out at the far post and demonstrated fantastic technique as he smashed a first-time volley beyond the diving McIntosh, as the ball crashed into the net just inside the right-hand post.

The hosts had the wind at their backs and looked to make it work to their advantage in their hunt for a leveller but our defensive diligence prevented them from gaining any true sights of goal. Indeed, it was a helping hand from our own defence which threw Deveronvale a lifeline.

A low delivery from the 'Vale left found no takers and Cohen Ramsay attempted to clear with his right foot at the far post. But under no pressure, the returning defender sliced the ball past the helpless Maclean and into the net to level it up again with just 10 minutes to go.

The game had a real cup tie feel about it and there was a sense in the air that there was still another goal to come. And it arrived two minutes into injury time as we won it in the most dramatic of fashions.

Young Kyle MacDonald - who only turned 18 last Sunday - marked just his second First Team appearance with a dream winner. The forward had been busy when he came on for fellow youngster Rory Williamson and he managed to work the space for a shot at the end of the box before flighting a curling and dipping effort over the despairing McIntosh, as the ball dropped into the net to spark wild celebrations among our depleted squad as we took home all three points on a day to remember.